Black man screams ‘My eyes!’ after arresting officers pepper-spray him within the face as Black Lives Matter protestors name for anti-police demonstration

By Henry Martin For Mailonline

Video of the incident in Leeds metropolis centre reveals an officer spraying the person, who was sat on a bench, earlier than two colleagues pull him to the bottom and handcuff him.

Three different officers then arrive as a crowd gathers round and the person being arrested cries ‘my eyes!’ repeatedly.

Witnesses ask why he’s being arrested, with some saying the scenes have been ‘outrageous’.

Somebody on the scene could be heard saying ‘f***ing b***’ shortly earlier than the officers take the person to the bottom.

Police issued a press release after the footage sparked accusations of racism and police brutality. 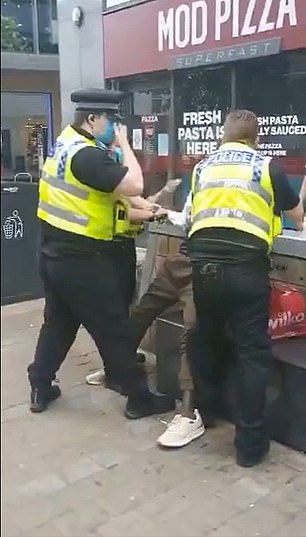 Video of the incident in Leeds metropolis centre reveals an officer spraying the person, who was sat on a bench, earlier than two colleagues pull him to the bottom and handcuff him

A spokesman for West Yorkshire Police mentioned officers had been pressured to take motion after the person was seen appearing aggressively and was eliminated twice from Trinity Leeds purchasing centre by safety workers, Leeds Stay studies.

He had began consuming alcohol in breach of the Public Areas Safety Order on Albion Road and officers have been referred to as to the scene at 5.46pm on Monday, it was claimed.

They discovered him on Albion Road the place officers spoke to him for greater than eight minutes, making an attempt to ascertain his identification as a suspect for these offences, the pressure mentioned.

However he refused to present his particulars, they added.

They declare the incident is an instance of ‘blatant police racism’ and ‘police brutality’.

The group posted the video on Fb together with a press release saying: ‘United for Black Lives are alarmed to see footage of blatant police racism in Leeds city centre yesterday shortly after 6pm.

‘A lone black man was sat on a bench and was then set upon and confronted by three law enforcement officials.

‘The person refused to present his identify and particulars which is his proper underneath the regulation however one police officer sporting blue gloves, for no obvious purpose, continued to place his fingers close to the person’s face while harassing him and touching his higher physique in what can solely be surmised as tried provocation.

‘This harmless man didn’t in any manner react to this blatant provocation. It’s clear that this man is inside his rights to not give the police his particulars except they’ll clearly state why they’re interrogating and publicly harassing him.

‘The gloved police officer continues to place his fingers within the man’s face and contact his higher physique.

‘For no obvious purpose the identical police officer makes an attempt to grabs the person’s hand and when that is objected to, takes out his pepper spray and sprays the person instantly in his eyes.

‘The officer is joined by his two colleagues after they wrestle the person to the bottom a lot to the disapproval of witnesses to this police brutality.’

The group added: ‘Black communities are uninterested in seeing the police abuse their place by profiling and attacking harmless black individuals on the street for no good purpose. We is not going to tolerate police racism and brutality.

‘The ridiculous excuse for arrest was acknowledged as ”suspicion of anti-social behaviour.”

‘The one anti-social behaviour was by the hands of the racist law enforcement officials that handcuffed this man who was screaming from the ache of his eyes burning from the pepper spray.

‘We demand a public apology from the police in Leeds. We demand that this man is launched with out cost and compensated for the brutality and humiliation he was subjected to.

‘BLM Leeds will now be responding this gross injustice with an emergency protest at this time, eighth June 2021, on the place of illegal arrest, 48 Albion Road, Leeds, LS1 6AB.’